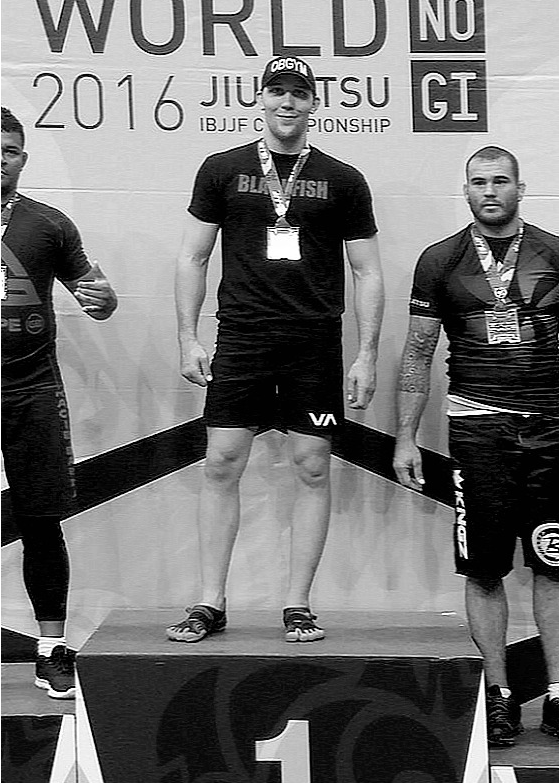 John Hansen is a first-degree blackbelt in Brazilian Jiu-Jitsu.  One of the founding members of the Blackfish, John has spent the last decade of his life devoted to training and perfecting the art of Brazilian Jiu-Jitsu. A two-time World Champion (2016, 2017 Blackbelt No-Gi), John has been competing on the World Stage since 2010.  He has proven his skill and dedication to the art, and his hard work is often awarded. He is a World Medalist, Pan-American Champion, multi-time National Champion, and Abu Dhabi Pro Trials winner.  John actually began his career in martial arts by learning on the internet, and his self-driven attitude enhanced his ability to learn and grow as a martial arts specialist. After he was awarded a silver medal at No-Gi World’s Jui Juitsu Championship in 2010 as a Purple belt, he was promoted to Brown belt by Luis ‘Sucuri‘ Togno of Alliance BJJ.

After the tragic death of John’s coach Luis, John began training under Rodrigo Vaghi.  Since then, John has flown the flag of Team Vaghi and continues to represent him, every time he steps on the mat.  Hansen has been greatly influenced by the amazing teachers that he has trained under, and began his career coaching and teaching BJJ as a way to give back to the community that gave him so much success, passion, and purpose. He takes pride in the Blackfish and truly counts them as his own family.