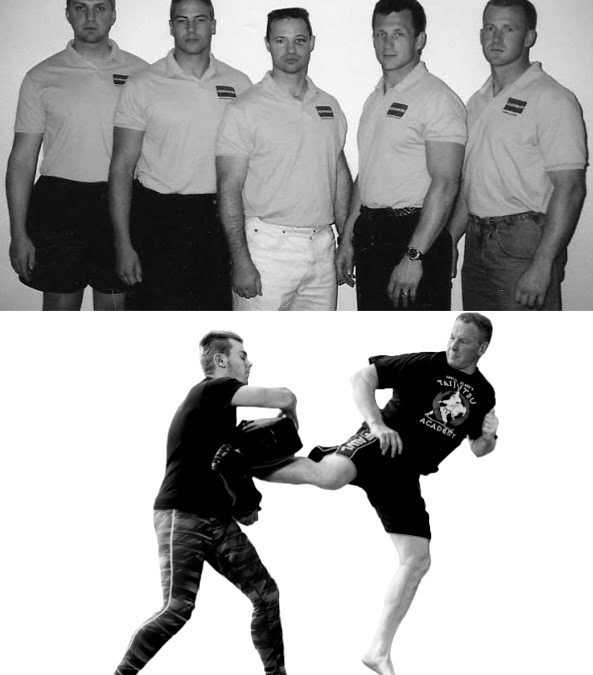 What’s in a name?  We found out quite a bit, actually.

Dan Clark has been teaching martial arts classes in a commercial dojo since 1984.  In 1992, four martial artists came together from collective martial arts backgrounds to form a martial art which was eventually named Taijutsu.  Dan Clark, Dennis Clark, Steve Jennum and Keith Jones believed there was a need to form a mixed martial art while maintaining a traditional format. Taijutsu translates from Japanese to English as “skill with the body” or “unarmed combat”.  The Samari and the Ninja both referred to their unarmed combatives as “Taijutsu”. The collective team had various degrees in black belts and backgrounds in Tae Kwon Do, Hapkido, Kickboxing, Ninjutsu, and RBWI (Robert Bussey’s Warrior International).  The team was also conducting active research into techniques from Judo, Wrestling, Brazilian Jiujitsu, Boxing and Muay Thai Kickboxing. The objective was to analyze fighting techniques, adopt what was effective in a self-defense situation, and discard anything which was believed to be ineffective or only sport related.

The team was heavily influenced by a number of martial artists, fighters, and students who brought fighting knowledge with them while studying Taijutsu.  No one student who became an instructor had more of an impact on the system than Joe Baudler. Joe had a deep background in wrestling and took to reality-based fighting like a fish to water.  Joe fully embraced the MMA reality based martial arts approach. Joe contributed significantly to the development and progression of Taijutsu, and continues to do so today. Furthermore, Joe became a black belt in BJJ (Brazilian Jiujitsu) and is a highly regarded MMA coach for those wanting to compete in mixed martial arts.

For over 3 decades, Dan Clark and the Taijutsu Academy have had the opportunity to assist some incredibly talented martial artists.  A number of students have gone into law enforcement or the military, and were in situations where their training has contributed to a successful outcome in physical situations as well as through mental stamina.  Furthermore, a number of the system’s black belts, or students who started their fighting training in Taijutsu, went on to be successful in MMA competitions including the UFC.

Several years ago,  John Hansen brought Brazilian Jiujitsu (BJJ) to the Taijutsu Academy under the Team Vaghi umbrella.  The team known as Axios / “Blackfish” was the most winning BJJ team in the region and has since produced several world champions including Hansen, Baudler, BJ Donahoe and youth competitor Zayn Larsen.  The team is highly competitive and contribute significantly to the Taijutsu Academy. Muay Thai and kickboxing legend coach, Kurt Podany, also brought his team known as Premier Kickboxing into the Taijutsu Academy.  Kurt’s an outstanding coach and has contributed significantly to both Muay Thai champions in addition to MMA competitors. Both competitors and those desiring a different form of exercise with self-defense benefits enjoy Kurt’s program.

The Taijustsu Academy, along with the Axios BBJ and Premier Kickboxing programs, all share a common goal… to provide outstanding instruction in an environment that fosters growth and development that remains relative in not only the competitive arena but in it’s roots of realistic self-defense techniques.

To better represent what is taking place at the dojo, the name is changing to simply “The Academy”.  Taijutsu is not the only martial art being taught, therefore, it is appropriate for the name of the facility to reflect what is occurring there … a place of learning in a respectful environment.  We look forward to the next phase of evolutionary process and the martial artists it will produce.